Amusement Parks: How Safe Are You? 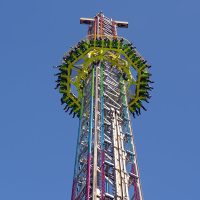 Every day, thousands of people go on amusement park rides, under the assumption that these rides are safe. We allow these rides to hurl us at incredible speeds, at heights that often exceed the heights of major buildings. There seems to be a perpetual race as to which park can build rides that go faster, or higher.

Statistics May be Misleading

But statistics can be misleading—rides can, and do, fail. Sometimes they fail because of mechanical errors, and sometimes because of human error. It remains unknown what caused a recent, horrific fatality at Orlando, Florida’s ICON amusement park.

The accident involved a 14-year old boy, seated in a chair that shoots riders up into the air. The ride shoots riders up and down at speeds that exceed 70 miles per hour, and is one of the highest rides in the United States.

The boy apparently slipped out of the seat, and fell to his death at the height of the ride.

The prevailing thought is that the boy may have slipped out because he was too large for the ride; although only 14, the boy was well over 6 feet and over 300 pounds. There is also some belief that secondary harnesses may not have been used or may not have been operational. These are like backup seat belts, that restrain riders in the event the main, larger harnesses should fail.

If any of this turns out to be the cause, it certainly calls into question the training that was given to park operators. Many operators are underpaid, and especially at smaller amusement parks, the staff may be seasonal, and may not be giving close attention to people who get on their rides.

Lack of Any Federal Oversight

Despite the inherent danger with amusement park rides, one thing is clear: There are no federal laws that set safety regulations for amusement parks. No rules that say how fast or high a ride can go, what safety measures a particular ride must have, or what kind of training that ride operators must undergo.

The parks say that such regulations are unneeded, and that they do a sufficient job of regulating themselves. Some states have their own regulations, but these regulations are not uniform from state to state, and may not even govern traveling, temporary amusement parks, like local carnivals.

Even in the absence of such regulations, a victim can still sue for injuries caused at an amusement park or on a ride. Experts can be used to say whether a ride or ride operators were safe or safely trained, the absence of written federal laws.

Contact our Rhode Island personal injury lawyers at Robert E. Craven & Associates at 401-453-2700 today if you have been injured in an amusement park, or on any other kind of property.

By Robert E. Craven & Associates | Posted on May 18, 2022
« Changes To Credit Reporting Will Help Those With Medical Debt
Texting While Walking Is Actually A Serious And Dangerous Thing »