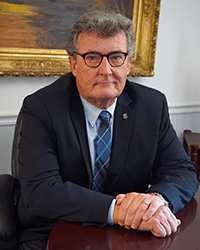 Robert E. Craven is the firm’s proprietor and lead trial attorney. Since the founding of Robert E. Craven & Associates, Bob has handled hundreds of personal injury, criminal defense, DUI defense, and medical malpractice cases. Attorney Craven’s experience as a former prosecutor makes him uniquely equipped to bring any matter to trial – an increasingly rare skill today. Bob regularly brings both criminal and personal injury matters to trial to get the best results for his clients.

Bob began his legal career as an Assistant Attorney General for the State of Rhode Island from 1983 to 1992. During that time, Bob served as lead trial lawyer and Chief of the Public Corruptions Unit. Thereafter, Bob was named the Town Solicitor in Foster, RI (1998-2004) and Assistant Solicitor for East Providence (2008-2019). He is currently the Town Solicitor in Charlestown, RI (2007-Present) and Solicitor for the Exeter-West Greenwich Regional School District (2021-Present). Attorney Craven also served as Legal Counsel for the Rhode Island State Board of Elections from 1995 – 2001.

Attorney Robert E. Craven has also served as an adjunct instructor for the Community College of Rhode Island where he taught law courses in the business department and law department each semester between 1983 and 2002.

Currently, Attorney Craven actively participates in monthly legal clinics rendering free legal advice to those financially unable to employ an attorney. These are sponsored by the Rhode Island Coalition for the Homeless and the Rhode Island Volunteer Lawyers Program. He is also a participant in the Speakers Bureau of the Rhode Island Bar Association where he lectures and educates school age children as well as law students and colleagues about the law and legal issues. Bob is a proud sponsor of the Special Olympics, and has sponsored, coached, and managed teams in the Wickford, RI Little League.

Attorney Robert Craven is happily married and has two sons. He enjoys golfing, traveling and spending time with his family. He is always ready to lend a helping hand to anyone in need and is generous with his time and advice. Attorney Craven is often heard saying “I’m happy to help” with tremendous sincerity.