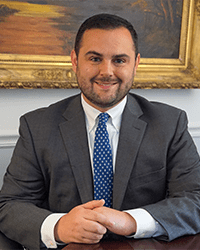 Attorney Nicholas A. Solitro is an adjunct instructor for the Community College of Rhode Island where he teaches law courses.