Texting While Walking Can Actually Be Pretty Dangerous 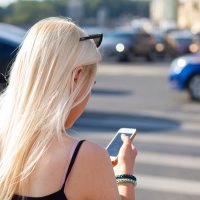 Texting and driving at the same time is dangerous. You probably know this already, as public service announcements and the media send us this message every day. But what about walking and texting? This, too, can be dangerous—and it doesn’t get a lot of publicity.

How Dangerous is It?

The risks when texting while walking are much the same as when you text and drive, only without the car: The distraction to you, is the inability to recognize and react to outside dangers and risks. As humans, we are still very poor multitaskers.

Listening to music did not alter someone’s ability to walk or be aware, but doing anything else on a phone, like reading, or playing on social media sites, did cause people to veer off track.

Injuries Caused by Texting and Walking

People on their phones while they walk tend to suffer cuts to the head, contusions, abrasions, and injuries to the internal organs. And the injuries don’t just come from being distracted, and getting injured, but many injuries are caused by the phones themselves.

When someone’s head is down, there is pressure on the spine. Researchers found that extended looking down at phones was equivalent to another 20 or 30 pounds of pressure on someone’s neck.

Legally, being injured while you are on your cell phone can have consequences. The other side can say that you were fully or partially responsible for your own injuries, because you were on a cellphone when you were hit by a car, or when you were injured.

This is called comparative fault—the law requires that even if we are victims in an accident, that we take measures to act safely, and do what we can to avoid accidents.

The same holds true for a slip and fall accident—if you were on your phone, the Defendant will try to say that you could have seen, and avoided, whatever you fell on, had you not been walking while on your phone.

The end effect of this evidence is that it can reduce the amount that you would be allowed to recover in court.

Stay safe and get help if someone ignores your safety. Our Rhode Island personal injury lawyers at Robert E. Craven & Associates are here to answer your questions. Call 401-453-2700 today.

By Robert E. Craven & Associates | Posted on December 9, 2021
« Malpractice During Childbirth Can Be Serious
What To Expect At Your Personal Injury Deposition »