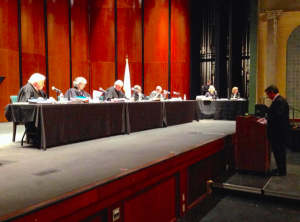 On April 2, 2015, Rhode Island attorney Robert Craven argued before the RI Supreme Court.  The case dealt with the City of East Providence’s decision to deny a concealable weapons permit to an applicant.  Attorney Craven’s argument addressed the extent of Second Amendment Rights and the legal process by which an applicant is (or isn’t) entitled to a weapons permit in Rhode Island.  Specifically at issue was whether RI law requires cities and towns to issue a weapons permit to applicants and if there is any room for the exercise of discretion in licensing certain individuals.

The hearing was held at Rhode Island College as the Supreme Court was on it’s annual “Ride the Circuit,” which dates to colonial times when the courts traveled from town to town, taking the people’s business directly to the people.  The justices peppered Craven with questions as to why the court should side with his argument.

The Supreme Court will issue a written decision on the argument in upcoming weeks. It is anticipated that this decision will greatly impact the landscape of Second Amendment Rights and private gun ownership in Rhode Island.