Do All Elderly Drivers in Rhode Island Get Their Driver’s License Suspended or Face Restrictions? 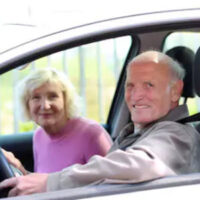 Most traffic rules and regulations imposed by the Rhode Island Department of Motor Vehicles (DMV) apply to all drivers regardless of age. While the state claims that it has no special rules for motorists based on age alone, there are special license renewal requirements for drivers who are 75 and older.

Other legal rules that may be relevant to older drivers include possible restrictions of an elderly driver’s license and procedures for securing disability parking plates and placards.

Fact: Older drivers, particularly those who are 75 or older, have higher crash death rates compared to their middle-aged counterparts (aged 35-54). Elderly drivers are also presumed to be more likely to cause auto accidents.

This is evident from a recent car accident in Seekonk, Massachusetts, involving an elderly driver from Providence, Rhode Island.

According to The Sun Chronicle, the elderly driver hit three women with his vehicle in a Route 6 shopping plaza parking lot. The 76-year-old driver faces license revocation and charges, including negligent operation of a car.

The elderly driver from Providence hit the three women while backing up near Ocean State Job Lot. He also hit another vehicle. As a result of the collision, one woman was pinned under his car. Firefighters had to use airbags to lift the vehicle and free the victim.

Two other women sustained non-life-threatening injuries. Police are seeking to have the 76-year-old driver’s license revoked in Massachusetts and Rhode Island. A court summons has been issued.

Rhode Island has special rules for drivers aged 75 and older who seek to renew their driver’s license:

Rhode Island’s DMV may also place restrictions on an older driver’s license after conducting a driving test and discussing these possible restrictions or conditions with the motorist.

For example, the requirement to wear glasses or corrective contact lenses is a common restriction for drivers aged 75 or older in Rhode Island. Other requirements include:

Getting Parking Placards as an Older Driver in Rhode Island

If an elderly driver’s mobility is impaired or he/she has other disabilities or conditions certified by a licensed medical practitioner, that driver may have to get a parking placard and plate. These placards and plates can be obtained by those who:

Contact a Rhode Island car accident attorney if your parent, who is 75 or older, has been in a crash or faces restrictions or license revocation. We might be able to help. Call at 401-453-2700 to discuss your case with Robert E. Craven & Associates.