Who Will Pay Your Medical Bills After a Rhode Island Car Accident? 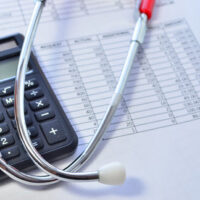 Our Rhode Island car accident attorneys at Robert E. Craven & Associates are often asked, “Who will pay for my medical expenses following a vehicle crash?” It is understandable why people who sustain injuries in an auto accident are concerned about the payment of their medical bills.

Car accidents are an unexpected occurrence, which is why anyone can be caught off guard by costly medical bills following the crash. In Rhode Island, you have the option of filing a personal injury claim to obtain compensation for your medical expenses and other accident-related damages and losses.

However, you are unlikely to receive a settlement until after you have reached maximum medical improvement (MMI) or have fully recovered. Thus, you will most likely have to pay your medical bills for quite some time before you can be reimbursed for the expenses.

Following your auto accident, you will be responsible for paying your medical bills on an ongoing basis. However, if another party is found to be at fault for the crash, they will be ordered to pay you for all the damages and losses incurred as a result of their negligence.

In other words, if another person was to blame for causing your car accident, that person will be held liable for your damages, including medical expenses. When this happens, the at-fault motorist’s insurance company will pay you for the damages.

Typically, you can obtain compensation for your medical expenses, lost wages, and other damages by:

Those who live in “no-fault” states must first seek compensation through their own insurance company before pursuing the at-fault motorist to pay their medical bills. However, Rhode Island is a “fault” state, which means you can file a claim with the at-fault driver’s insurance carrier straight away.

If your vehicle crash was caused by an uninsured driver or you were involved in a hit-and-run accident, you could seek compensation through the Uninsured Motorist (UM) policy as part of your auto insurance coverage.

If you are still wondering who will pay your medical bills following an auto accident in Rhode Island, consult with our knowledgeable attorneys at Robert E. Craven & Associates. Call at 401-453-2700 to schedule a consultation.

By Robert E. Craven & Associates | Posted on August 17, 2020
« Can You Seek Compensation if You Were Partially at Fault in a Rhode Island Car Accident?
6 Tips to Stay Safe as a Pedestrian and Prevent Pedestrian Accidents in Rhode Island »